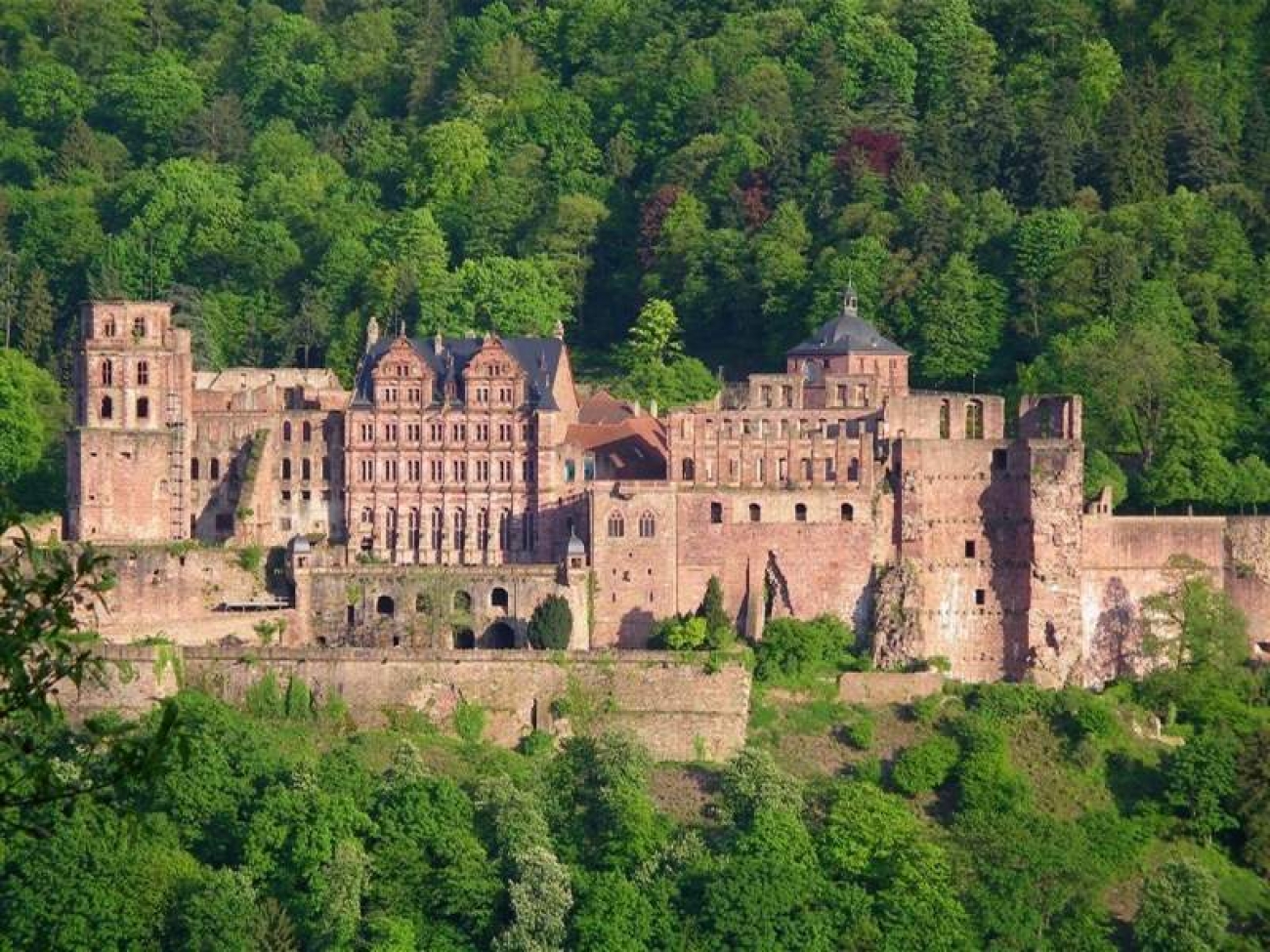 Romantic cities, medieval castles and palaces are the other person in Germany we know. Follow us on a journey that uniquely combines the "Wine Road" and complemented by the incredible natural landscapes in the Black Forest with picturesque villages and holiday homes. Furthermore, a rich trek to beautiful Alsace with a thorough acquaintance of its capital, picturesque Strasbourg, the seat of the European Parliament. Great hotels that make your stay wonderful and luxurious. And staying in expensive Heidelberg that most offices avoid.

Day 1: Athens - Frankfurt - Baden Baden - Strasbourg
Flight direct to Frankfurt. Arrival and direct departure for Baden-Baden, known for its Roman baths, marvelous architecture and cosmopolitan life. Warm bathrooms, casinos, majestic early 20th century buildings with gables and Corinthian columns form a backdrop for prosperity, wealth and relaxation. We continue to Strasbourg, the capital and center of Alsace, which is also the seat of the European Parliament. The city is built on the west bank of the Rhine and is crossed by the river Ille and there are canals that extend into it. Our current hiking tour focuses on the historic center of Strasbourg protected by Unesco as a World Heritage Site. We cross the Republic Square, where we see the National Library, the Rhine District building and the National Theater. Then comes the Strasbourg Opera House and the Town Hall. We continue to Clabber Square, on the north end of which is the city's "trademark" and the most important tram hub, Homme de Fer, a metal and glass rotunda that is named after the soldier with its armor standing in the side building, four meters higher. Clabber Square has been designated a UNESCO World Heritage Site, named after the French Revolutionary General's homonym who was buried under a statue in the center of the square. The symbol of the city is the Notre Dam Cathedral, 142 meters high and made of a kind of unusual rock that requires constant restorations. Then walk to the city's oldest neighborhood of "Little France" where fishermen and tanners had their homes in the past. Accommodation at the hotel. In the evening free to stroll the boats and get to know the canals of the city with its magnificent architecture.

Day 2: Strasbourg - Wine Routes (Rickville - Colmar - Eguishheim)
Today we will dedicate it to an outstanding trek to the famous Wine Streets, amidst romantic medieval towns with long-lived reproduction, respect for nature and lush vineyards with scattered wineries. Our first stop will be the small town of Rickville, built between large vineyards on the eastern slope of the Vosges Mountains. For centuries it has been the property of the Dukes of Württemberg and having been spared by the wars that ravaged the area preserves 16th-century residential architecture, while its few inhabitants have continued to cultivate Ries grape varieties to this day. It preserves part of its fortification, cobblestone streets and towers, old fountains, beautiful house roofs, timbering, wall paintings, a variety of flowers in the windows. Continue on to Colmar, a city reminiscent of a painting. Pastel-colored wooden houses on canals and colorful flowers give a distinctive atmosphere to perhaps Alsace's most beautiful city. Its historic center is crossed by the Lauch tributary of the Ill, which flows into the Rhine. Be sure to try a glass of the fine white wine produced in the area at one of the many shops in Colmar, which is not unjustly called the capital of wine. We continue on to Eguishheim, our last destination that has kept all of its traditional architecture intact. Built in concentric circles around the 13th century octagonal castle, it is surrounded by vineyards of two local varieties. We will ... be fearlessly lost in its circular alleys: they always bring you where you started. Small houses with balconies, logs, prominent windows smothered in our geraniums impress us. The main square is not lacking in beauty with its fountain, the castle of the 8th century city with the outer wall of 720 AD. and the chapel of Reformed Pope Leo IX born here. The tops of the castle tower and the Temple host stork nests. Other historical sights are the temple of Peter and Paul, which blends roman and gothic architectural style, the city's two Renaissance fountains as well as the statue of Ioanna Lorraine. Return to Strasbourg late in the afternoon.

Day 3: Strasbourg - Freiburg - Black Forest - Tribberg - Lake Titice - Heidelberg
We leave Strasbourg and depart for the heart of one of Central Europe's most famous mountain ranges, the famous Black Forest that will reveal to us a unique natural landscape that despite its name (Melas) is not at all 'dark'. Picturesque villages with rolling houses, lakes, waterfalls, pines and firs accompany us throughout our journey. Our first stop was Freiburg, one of the few the well-known German campuses and at the same time an important producer of quality wines that constitute the southern entrance to the Black Forest. It is Germany's sunniest city with 2,000 hours of sunshine, one of the most eco-friendly cities in the country. It produces as much electricity from the sun as the whole of Britain does. We begin with the gigantic 11th-century Gothic Cathedral with the 116-meter bell tower rising anxiously. To the east of the Cathedral, the square attracts a look with its bright red color, its elaborate facade and its colorful towers, the historic 16th-century Kaufhaus commercial building. We visit the Town Hall Square with the Old and New Town Hall and the Dominican Church of St. Martinou with its adjoining skete as well as the whale house, a magnificent architectural contrast to the space with its post-Gothic prominent windows. Continue on to the picturesque Lake Titice with great coffee and shops. Next is Trimberg, a small mountain town with the famous waterfalls of the Gautach River, totaling 151 meters, and traditional wood-carved cuckoo clocks available in a myriad of shops in the city. We continue on to the country's oldest campus, historic Heidelberg. Heidelberg's old medieval town founded in 1196, with more than three million visitors annually at the top of Germany's traffic. Late in the afternoon arrival and accommodation at our hotel.

Day 4: Heidelberg
After breakfast we will tour the city on foot. Old Heidelberg, a dreamy city and center of German romanticism, will enchant us on our guided tour. The dominant medieval stone bridge (Alte Brucke) of the Neckar River built in 1788 on its northern edge with the iconic bronze sculpture of "Heidelberg Monkey". There is the Old Bridge Gate, an arch with two tall turrets, dedicated to the 13th-century founder and founder of the University Karl Theodor. Crossing the bridge with magnificent railings we will be photographed overlooking the medieval town crowned by the amphitheatrical castle on Mount Königstuhl, also referred to as the "Palace". The historic city center that we will walk on has a lot to show us. We will see the central point of the city, the Market Square (Marktplatz) with the Hercules fountain and the place where criminals were chained to confront the people. Behind it is the old Town Hall building and opposite it the famous Gothic Temple of the Holy Spirit built between 1398 and 1441. We will continue on the great Haupstrasse pedestrian street and towards the buildings of the distinguished University of Heidelberg, Germany 18 (30 year 36) students. We will see the old building of 1735, which today is the Rectorate, the University Square, the New University, the Library, the student jail of the naughty students, that is, they were drunk, noisy, self-conscious or drunk. We also see, among other things, the Kornmarkt Grain Market Square, with its fountain and the sculpture of Our Lady of the Angels (1718), in order to bring back the evil-minded Protestants back to the Roman Catholic Doctrine in the context of Antimatter. And the next square, a little further east of Karlsplatz, is decorated with a fountain, which contrasts with the cosmography of the famous humanist Sebastian Münster. Not at all unlikely for Heidelberg, who defined intellectual life by scholars and not just leaders. In your free time in the heart of the Old Town and on the pedestrian street you will find many restaurants or pubs with a variety of schnitzel or pork, potato soups, potato salad, pork cooked with black beer and varieties of beer. For those who wish they can continue on the north side of the city and cross the Nekar River to climb the famous "Path of the Philosophers". This is the path often taken by Heidelberg University professors and philosophers during the Romantic period. There you will find the serenity of the vineyards of the hill and the area will give you an excellent view of the city, the river and the valley and ... unique photos.

Day 5: Heidelberg - Wiesbaden - Frankfurt - Athens
Departure for Wiesbaden in the State of Hesse, famous for its hot springs and baths for which it has received over the years famous visitors such as Goethe, Dostoevsky, Wagner and Brahms. And because Frankfurt is a little more than just an entrance / exit station, we'll have a city tour today to see its most important sights with the impressive Manhattan financial center skyscrapers. Germany ', el cystic historic center and with the attendant we will walk to the old town with the Town Hall and also to the main shopping street of the city Zeil with nice cafes and modern department stores. Transfer to Frankfurt Airport for our return flight to Greece.